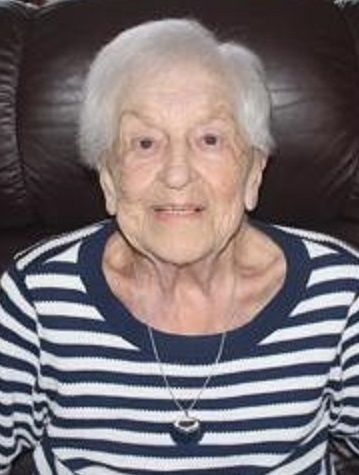 Please share a memory of Doris to include in a keepsake book for family and friends.
View Tribute Book

Doris Vidzar 95, of Stokes Westernville Rd passed away May 15, 2022, peacefully at home with her two daughters by her side. She was born in Pittston, Pennsylvania on October 18th, 1926 to the late George and Zelinda Colarusso. She spent her younger years in Pittson and graduated from Pittston High where she was a cheerleader and a tap dancer. She dated a handsome young man, Anthony Vidzar, who then went into the Navy. Upon his return, they reunited and married on April 12th, 1947, at Mount Carmel Church in Pittston, PA. They had a blessed union of over 60 years until his death on November 20, 2007. At the time of their marriage, Anthony was working at Griffiss Air Force Base so she moved to Rome where they remained the rest of their lives.

Doris was a seamstress and worked in Pittson in her younger years. After she had her two children, she went back to work at Lumas Manufacturing Company until it burned down.  She then remained at home taking care of her family and her mother who lived with us for nineteen years.  She was an angel to all of us. There wasn't anything she would not do for her family.

Doris was a wonderful wife, mother, grandmother and great grandmother to her family. Her favorite thing to do was spending time with them. Our favorite memories were our Sunday dinners at their home on Delta Ave where we would gather and catch up on our week enjoying her wonderful cooking. She never knew who would be seated at her table for dinner so if you walked in at dinner time a plate would be handed to you because there was always more than enough food to share. She was the most kind and giving mother we could have ever asked for and family always came first. Doris was also an avid Yankee Fan and never missed a game. She knew everything about the team and the players.

She loved being a grandmother and recently a great grandmother. She was always there to help us raise our children no matter when help was needed. We don't know what we would have done without her in those early years.

When our dad died in 2007, she came to live with her daughter, Cynthia, on Stokes-Westernville Rd. She was with her for fifteen years until her passing. Doris also loved to go to Turning Stone Casino to play the video poker games. With the help of Carole Maksymczuk (who we always referred to as daughter number three) we would take her to play and have lunch.

Our family wishes to extend our gratitude to the nurses and staff at Hospice & Palliative Care for their support and comfort in making Mom's passing a peaceful one.

Mom's passing has left us with broken hearts but we know she is at peace now and reunited with her beloved husband. We love you, Mom.

Service will be held at the convenience of the family.

To plant a beautiful memorial tree in memory of Doris Vidzar, please visit our Tree Store

Look inside to read what others have shared
Family and friends are coming together online to create a special keepsake. Every memory left on the online obituary will be automatically included in this book.
View Tribute Book
Services for Doris Vidzar
There are no events scheduled. You can still show your support by planting a tree in memory of Doris Vidzar.
Plant a tree in memory of Doris
Share Your Memory of
Doris
Upload Your Memory View All Memories
Be the first to upload a memory!
Share A Memory
Plant a Tree