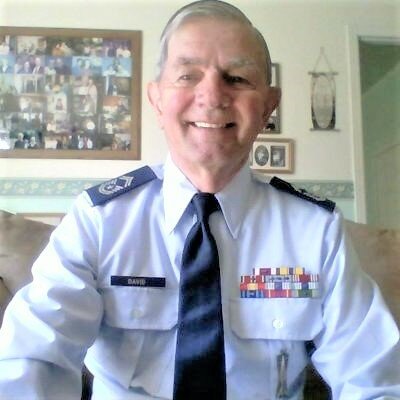 He was born July 1, 1941, in Racine WI, a son of the late Warren H. and Dorothy M. Love David.  Robert proudly served 23 years in the USAF, retiring in 1983.  He later worked as produce manager in Walmart in Rome, retiring years ago.  He was a member of New Beginnings Community Church in Rome for 30 years.

Robert is survived by his children, Tiffany and Brandon Galloway of GA, and Jody Leuck of NE, Michael W. and Glenda David of N.C., Robert Jr. and Brenda David of NV, Warren S. David of NE, and Dustin M. and Amy Schellerer of NY; sisters, Kathy and Tony Trentadue, Nancy Dresen and Jay Winkie of WI, and Jamie and George Lambert of WI; a brother, Donald and Karen David of WI; a brother-in-law, Brad Carter; 11 grandchildren and 5 great grandchildren; and 10 nieces and nephews.  He was predeceased by a sister, Bobette Carter

Funeral services with Military Honors will be held at Gerald B. H. Solomon Saratoga National Cemetery on Thursday, May 26, 2022, at 11:00 AM

To plant a beautiful memorial tree in memory of Robert David, please visit our Tree Store

Look inside to read what others have shared
Family and friends are coming together online to create a special keepsake. Every memory left on the online obituary will be automatically included in this book.
View Tribute Book
Services for Robert David
There are no events scheduled. You can still show your support by planting a tree in memory of Robert David.
Plant a tree in memory of Robert
Share Your Memory of
Robert
Upload Your Memory View All Memories
Be the first to upload a memory!
Share A Memory
Plant a Tree