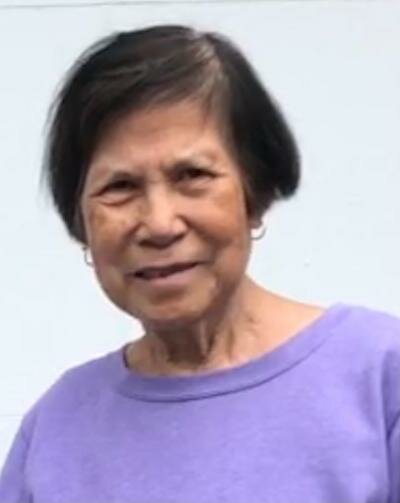 Please share a memory of Perseverancia to include in a keepsake book for family and friends.
View Tribute Book

Percy was born in Ormoc, Philippines on September 13, 1945 to the late José and Marina Macalalag Viros. She graduated from the University of the East in Manilla, Philippines with a Bachelor of Science in Elementary Education. On October 27, 1970, she was united in marriage to Edward Sears. Upon moving to Rome, she worked as a teacher, and as a tailor at Griffiss AFB. She became a small business owner of Superior Dry Cleaners and co-owned Percy's Variety store with her husband, Ed. Prior to retirement, she worked as a florist.

Percy loved spending time with her grandchildren and enjoyed cooking, gardening, singing at church and making pillows and quilts for the many craft shows she and Ed would attend.

Percy is survived by her husband of 51 years, Ed; her daughters, Marina (Chris) Dulin of PA, and Trisha (Ryan) Schultz of NV; three grandchildren, Caitlin, Jack, and Ryder; two sisters, Marietta Reamillo, and Teresita Samonte; a brother, Rudy Viros; and several nieces and nephews. She was predeceased by two brothers, José Jr. and Romeo Viros.

The family would like to thank the staff at the Rome Dialysis Center, Marissa Amuso Bolivar and especially Kim Amuso, a devoted caregiver.

Burial will be in Woodgate Cemetery.

To plant a beautiful memorial tree in memory of Perseverancia Sears, please visit our Tree Store

Look inside to read what others have shared
Family and friends are coming together online to create a special keepsake. Every memory left on the online obituary will be automatically included in this book.
View Tribute Book
Services for Perseverancia Sears
There are no events scheduled. You can still show your support by planting a tree in memory of Perseverancia Sears.
Plant a tree in memory of Perseverancia
Share Your Memory of
Perseverancia
Upload Your Memory View All Memories
Be the first to upload a memory!
Share A Memory
Plant a Tree