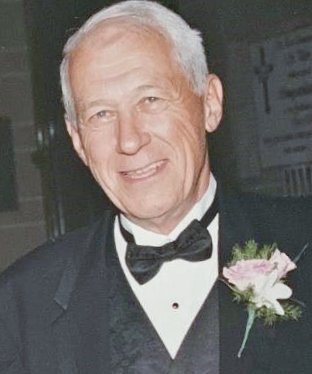 John H. Roberts II, 88, went to be with our Lord on Sunday, November 8, 2020 at home surrounded by his loving family.

Born in Rome, NY on August 1, 1932 he was the son of the late J. Henry and Margaret (O’Brien) Roberts. John was a graduate of St. Aloysius Academy, Morrisville College, St. Michael’s College in Toronto, Canada, and Utica College of Syracuse University. He was a patriot and proudly served his country in the US Army during the Korean War. On June 7, 1958, he married Natalie Giannecchini in St. John the Baptist Church, Rome, and they had 62 blessed years together. He taught science in the Rome City School District at Strough Jr. High, retiring in 1990.

A devout Catholic and lifelong member of St. Peter’s Church, God came first in his life as he provided a great example for his children and grandchildren. He enjoyed making wine every fall and singing in the church choir.  He was a member of both the Utica and Mohawk Valley Barbershop Choruses for many years. Yearly family vacations in Ocean Isle Beach, NC were always a highlight. He loved playing golf, especially with his sons, in-laws and grandchildren in the John H. Roberts II Family Golf Championship Tournament, held annually in his name since 1991.

John was a wonderful husband, father, and grandfather who was immensely loved and will be severely missed.  We love you Dad.  We will always remember everything you taught us, especially to “keep your eyes on the prize (Jesus).”