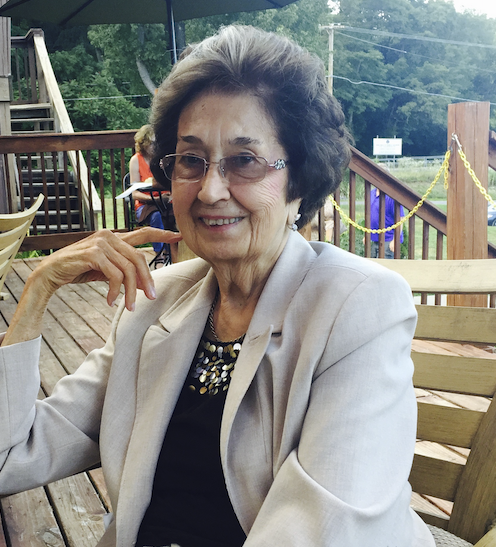 Anna Santoro Tyler passed away peacefully on Friday, October 4, 2019 in her home, with her family by her side. Anna was born on September 6, 1929 and was the eldest daughter of Pio and Antoinette “Alice” (Torio) Santoro. Anna’s sisters were Mary Ann S. Lince, Jenny S. Kemp, and Louisa “Lulu” S. Briggs. Anna was joined in marriage to Francis Leo “Red” Tyler on May 3, 1958 in Rome, and they had a blessed union of more than 61 years. Anna leaves two sons and a daughter in law, David Francis and Patricia Ann Tyler, and Stephen Charles Tyler; a grandson, Jeremy Francis Tyler; and a great grandson, Owen Francis Hunt. Anna was predeceased by her husband and a grandson, Daniel Townsend Tyler. She leaves behind a beautiful Pekingese dog named Toby, who was by her side in her final hours.

Anna was a 1947 Graduate of Rome Free Academy (RFA) and was President of the Young Republicans Club in her senior year. Anna worked for many years for the US Air Force at Griffiss AFB in Rome. She was the Director of Civilian Personnel for the 416th Bomb Wing of the Strategic Air Command (SAC). This also included duties for the Rome Air Development Center (RADC) now Air Force Research Laboratory (AFRL), Rome Research Site and the 485th Communications Squadron. In 1964, she was awarded the US Air Force Material Command’s Commendation for Meritorious Service for her work for the Rome Air Material Area (ROAMA). She was awarded Outstanding Civilian Administration Technician of the Year for the US Air Force in 1973. Anna taught Equal Employment Opportunity (EEO) courses at the New School for Social Research.

Anna was a volunteer at AmeriCU Credit Union from 1968 – 2016, she was Chairman of the Board of Directors 1999 – 2014. She also held many other positions there over the years such as Vice Chairman Board of Directors, Recording Officer of the Board of Directors. She has chaired numerous Credit Union Committees, including; the Human Resources Committee and the Strategic Planning Committee. She was the Recording Officer, an Investment Committee an Ad Hoc Member, and on the Procurement, Legislative, Education and Community Relations Committees. She was also the President of Hamilton Associates, Inc. a Credit Union Service Organization (CUSO). The AmeriCU Board Room was dedicated in her honor in 2016 and renamed (The Tyler Boardroom).

Anna has been an active member of the Rome Community for more than 60 years. She has supported many local organizations throughout the years, including the American Heart Association, American Cancer Society, Relay for Life, United Way, YWCA, Humane Society, Rome Rescue Mission, The Store Room for the Needy and the Red Cross. Anna was a founding member of the Rome Voluntary Action Center (RVAC). She was given the United Way’s Gold Award in 1989. She was awarded the Roses for the Living Award in the 1978 by the Rotary Club.

Anna loved her family and they did many things together over her lifetime. The entire family spent many happy moments on many vacations over the past 30 years, especially in Lake Placid, the ancestral home of the Tyler’s. Anna enjoyed many dogs and cats over the years, and they added to family life at the Tyler household. Anna was extremely generous and helped many people over her lifetime. She did not hesitate to help with financial resources or physical labor. She was a good friend to many people, and she will certainly be missed by many.

She taught her family not to accept everything at face value and to look deeper into all things. She guided her children to get higher education and to love and respect their fellow humans. She loved her family deeply and constantly showed that love to them. Love was a common bond they all shared.

The Tyler Family would like to thank The Savoy Staff and Rick Montalbano the piano player for making her 90th birthday so special.

Anna was of the Hebrew Faith and he observed the Torah of Moses, including the Commandments, Dietary Laws and Holy Days of the Hebrew Bible. She will be given a private service by her son David who is a Minister ordained by the United Israel World Union (UIWU), one of the oldest Jewish Outreach organizations in the United States, founded in New York City in 1944 (UnitedIsrael.org). Anna will be interred alongside her husband, Red, and grandson, Daniel at the Blossoming Rose Biblical Tamar Park in Israel.