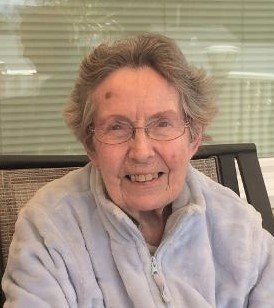 Margaret E. Russell, age 91, formerly Lee Center, passed away peacefully on July 9, 2021, at the home of her daughter, Amy Jones, in Henrietta, NY.

She was born January 17, 1930, in Watertown, a daughter of the late John and Dorothy McLauglin Edmonds, and educated in Glenfield and Copenhagen schools.  Margaret was united in marriage to Harry Russell on February 9, 1957, in Rutland, NY; he died on December 5, 2014.  Margaret and Harry resided in Copenhagen until 1959, when they moved to Westernville, and then to Lee Center in 1963, where they remained for the next fifty years.  She was a member of the Church of Christ in Rome, Lee Unity Seniors and the LeeSure Walkers.

Margaret was a voracious reader who could always be found with a book or newspaper in her hands.

Margaret is survived by her daughter and son in law, Amy and George Jones of Henrietta; a son and daughter in law, Andrew and Rosarin Pinyo Russell of Charlotte, NC; grandchildren, Coyle and Kiera of Charlotte, NC, Caitlin Eliss of Rushville, and Shawn Louise Scott of Macedon; and great grandchildren, Kaleb Scott of Macedon and Abigail Margaret of Rushville.  She was predeceased by a son Scott in 1981, sisters, Sylvia Dealing and Celestia McDonald, and brothers, Neal, Keith and Robert Edmonds

The funeral service will be held Friday at 2:00 PM, at Barry Funeral Home, 807 W. Chestnut Street.  Burial will be in Evergreen Cemetery.

Relatives and friends may call at the funeral home, from 12 Noon to 2 PM, prior to the funeral service.

In lieu of flowers, please consider a donation in Margaret’s name, to your local library.