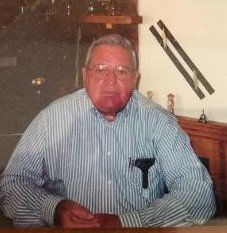 Jack was born on August 30, 1928, at the Rome hospital, the son of the late John H. Martin Sr., and Marjorie Fox Martin. Upon graduating from Rome Free Academy, he enlisted in the Army toward the end of WW II and spent his tour of duty in Colorado as part of the ski patrol. Upon discharge, Jack attended St. Lawrence University where he met his future wife Suzanne (Sukie) McHenry. After graduation Jack was united in marriage to Sukie on September 12, 1953 in her hometown of Hornell, NY. Before their marriage Jack bought a little fixer upper on Lake Delta on a street that would eventually be named after him, Martin Dr.  where they spent the next 63 years, until Sukie’s passing on May 10, 2016.

Jack worked in the engineering department at Rome Cable and retired after 37 years. He spent his life serving his community in several ways, he was elected Councilman of the Town of Lee after which he became the town board president, he also was active in the Elks Club, Kiwanis Club and a member of the Presbyterian church of Rome. Jack loved to sail and snow ski; he was a member of the National Ski Patrol at Woods Valley and served as Commodore at the Lake Delta Yacht Club. His love for sailing prompted him to move to the open waters of Lake Ontario and the 1000 Islands where he and Sukie spent their summers aboard their 36 ft sailboat named “LuLu.” They sailed out of the French Bay Marina with family and friends for over 20 years exploring all that the 1000 Islands had to offer. During the winter months he and Sukie lived in Stuart Florida in a boating community on the St. Lucie River called Circle Bay Yacht Club.

The funeral serve will be held Sunday at 3:00 PM, at the Barry Funeral Home, 807 W. Chestnut Street.  Burial will be in Lee Valley Cemetery.

Relatives and friends may call at the funeral home on Sunday from 1 to 3 PM, prior to the funeral service.

Memorial contributions may be made to the First Presbyterian Church of Rome.