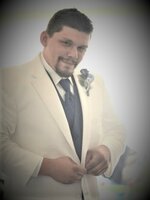 He was born December 8, 1986, in Oneida, NY the son of Shane Haley and Robin Secor Haley, and graduated from Adirondack Central School. David was united in marriage to the former Jaimi Bienkowski, on June 27, 2015, in St, Mark’s Church in North Utica. He was employed as a machine operator at Revere Copper Products in Rome.

David was a good hearted and loving husband, son and father to his four children. He loved playing paintball with his brother, Shane, nephew Lucas and many close friends. His most cherished times were when he would just spend time with his children, nephews and nieces. David was the kind of guy that would help anyone, anytime or place and he will be tremendously missed by all who knew and loved him dearly.

David is survived by loving wife, Jaimi; children, Karlee and Crysta Haley and Cierra and Charles Austin; his parents Robin Haley of Rome, and Shane and Kristie Haley of West Branch; his grandmother, Dawn M. Haley of Rome; brothers, Anthony and Amanda Secor of Rome, and Shane Jr, and Alyssa Haley of Ava; mother in law, Lisa Baker of Marcy and father in law, James and Nancy Bienkowski of Poland; Aunt and Uncles Leon Haley of Rome, and James Jr and Colleen Haley of Lee Center. With special love and hugs to David's favorite nieces and nephews, Timothy, Riley, David, and Jaden; Lucas and Isabella, Sarah, Tyler and Myah, Nicholas, Thomas and Madison; as well as extended family and close friends. He was predeceased by his grandparents, Francis and Betty Secor and James Haley, Sr.

Relatives and friends may call at the funeral home on Monday from 2 to 5 PM, prior to the funeral service.