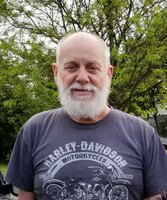 Tom was born in Norway, NY on February 3, 1949 to the late Ivan and Arlene Schafer Foster. On September 22, 1973 he was united in marriage to the former Paula Squadrito. He worked and retired from DeSimone Trucking.

Tom loved gong on long rides on his Harley-Davidson motorcycle with his wife. He was an avid NASCAR and WWE fan. He was a great mechanic and builder. He could fix just about anything and offered his help whether he was asked or not. Tom loved his family dearly. He was a great friend, father, and husband. He was the rock of his family and will leave a void that can never be filled.

The family would like to thank the day and night staff at Rome Health, especially the ICU and CCU, for their care and compassion shown to Tom and the family during his stay. Also, the family would like to extend a sincere thanks to his brother-in-law and sister-in-law, Ralph and Kim. As well as his niece and nephew, Stacy and Matt, for all of their love and support that they provided during his illness.

Per Tom’s request, there will be no services.