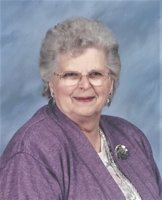 Arletta worked at Rome Sporting Goods for a short time, Rome Memorial Hospital for 11 years and was a teacher aide at Westmoreland Central School for 11 years, retiring in 1984.  She had been a member of the Bartlett Baptist Church, a 4-H Club leader, a Cub Scout den mother, a charter member of the Stanwix Heights Volunteer Fire Department Auxiliary, where she had held positions including secretary, financial secretary and historian.  She was a charter member of the former Stanwix I.O.O.B., where she was both a secretary and a chaplain.  She was a current member of the Westlanders Senior Citizens, where she was previously their musician and secretary.

Arletta is survived by three daughters, Sheila Sobik of Roanoke, VA, Gail Scott of Rome, and Janice (Jim) McCarthy of Westmoreland; two sons, Donald (Gretchen) Evans of Oriskany and Dean Evans (fiancée Damaris Ramirez) of Rome; 14 grandchildren and 23 great grandchildren.  She was predeceased by a son, Gordon E. Evans, Jr., sons in law, Richard Sobik and Leon Scott, a grandson in law, Andrew Maule, a great granddaughter, Samantha Maule, a sister and brother in law, Gerene and George Disburger, a brother and sister in law, Gordon and Kathleen Scofield.

Relatives and friends may call on Saturday, August 14, 2021, from 12:30PM to 2:30 PM, at Barry Funeral Home, 807 W. Chestnut Street. The funeral service will be Saturday at 2:30 PM, following the calling hours.  Burial will be in Townsend Cemetery.

In lieu of flowers, please consider a memorial donation to the American Cancer Society or a charity of your choice