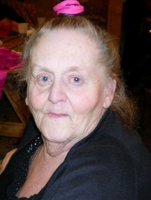 She was born September 17, 1943, in Taberg, a daughter of the late Arlington and Helen Roser Clark and attended Rome Schools.  Judith was united in marriage to Wayne Johnson in 1963; a happy union of 66 years.

Judy enjoyed spending time with her family and listening to her daughters and granddaughters sing.

Judy is survived by her husband, Wayne; children, Dina Johnson (James Burch), Debbie and George Pope, and Wayne and Kristine Johnson; 10 grandchildren and 14 great grandchildren.  She was predeceased by a brother, Richard Clark and a grandson, George Pope III, and several in-laws.

Funeral services will be private.  Burial in Lee State Road Cemetery will be in the spring.